Tactical Talk (Update) First, Iranian forces in Syria fired 20 rockets at Israel. Then Israel retaliated with a much larger show of force, with fighter jets striking dozens of Iranian targets in Syria. Iran and Israel have been fighting what the New York Times calls a “shadow war” in Syria, but the direct strikes on each other suggest that the conflict is in the shadows no more. Whether it grows into a larger conflict is now the big concern, and France, Russia, Germany, and the United Kingdom each separately called for restraint from both sides, reports i24 News. Details, developments, and background: 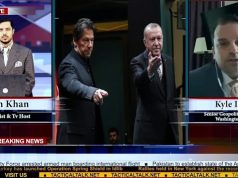 Tactical Talk - May 29, 2018
0
Tactical Talk (World News) A horrifying incident is becoming somewhat of a trend in India, where a third teenager has reportedly been raped and then...

Tactical Talk: The Chagos Archipelago case in the ICJ | Zain...

Tactical Talk: The Chagos Archipelago case in the ICJ | Zain...