The air forces of China and Pakistan began joint training exercises in China on Thursday.

“To build a world-class air force, we need to learn from foreign armies and improve our capability to complete multiple tasks,” said Shen, adding the Chinese air force will increase international exchanges and sharpen its combat effectiveness.

The “Shaheen” joint training was launched by the Chinese and Pakistani air forces in March 2011. 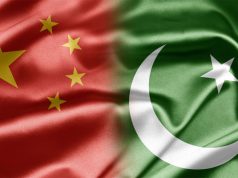