Malaysia and Turkey; two countries on two different edges of Asia that are geographically apart, but together at heart. So much so that the common grounds and similarities they share exceed their differences. 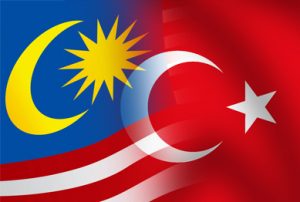 They have distinct state and ethnic structures, political histories and pasts. On the other hand, both countries have common spiritual and cultural values. They always put the Islamic values of peace, love, brotherhood, altruism, cooperation and solidarity before national interests.

Moreover, both are steadily growing, rising economic powers; both are countries where Islam and the libertarian and pluralist democracy are practiced in harmony, the diplomatic spheres of which extends increasingly, and that have close relations with the Western states. And the most prominent ones are the love, fondness and deep-rooted bonds between the two Muslim nations.

A FRIENDSHIP THAT GOES WAY BACK

The friendship and cooperation between the Turks and Malays date back as far as 15th century. The early relations between the Ottoman Empire and the Malay Sultanate began during the reign of Sultan Mehmet the Conquerer.

In addition to trade agreements, two countries laid the foundations of a kinship by the marriage between the daughter of Mehmet the Conqueror and the son of the Malay Sultan. And the efforts of the Ottoman envoys serving in the Malay Archipelago helped foster good relations.

It was again the Ottomans who lent a helping hand and provide military and political support to the Malay people in their fight against the Portuguese and Dutch colonialism.

The close and sincere associations between the palaces of Johor and Istanbul were further strengthened in the 19th century. Sultan Abu Bakar came to Istanbul to visit Sultan Abdulaziz in 1866, and Sultan Abdulhamid II in 1893.

These visits also conduced towards the marriages of Lady Rukiya and Lady Hatice from the Ottoman Palace into the Malay Palace. And as Muslim Malay Turks, their grandchildren held major positions in the Malaysian government ranks.

Following the independence of the State of Malaysia in 1957, the diplomatic relations with Turkey was re-established in 1964. Nevertheless, the 20th century marked a poor period in terms of bilateral relations. The bilateral relations were restored once again with the constructive role both countries played in the D-8 that was formed in 1997 through the joint effort of eight developing countries.

And the 2000s witnessed great developments, brand new breakthroughs and the beginning of a bright era in Malaysia-Turkey relations. In these years, the cooperation was raised to higher levels through the reciprocal visits by the heads and ministers of both states and signed agreements.

Economic relations that were elevated to cooperation on a strategic level through the Joint Declaration of Strategic Partnership signed in 2014, the decision to raise the volume of trade between the two countries to US$5 billion, and the Free Trade Agreement coming into effect in August 1st, 2015 were some of the milestones reached in the bilateral relations. These developments will at the same time help Malaysia and Turkey reach their goals of 2020 and 2023 respectively. 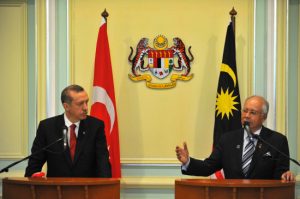 The statements made by President Erdogan in 2014 precisely express the inevitable need for unity between two brother countries: “We have considered and will continue to consider Malaysia as a country that is close, even brother to us. We are committed to work and we will continue our cooperation with Malaysia for the sakes of our countries, the Asia-Pacific region, and the entire world. As long as Turkey exists on one end of Asia and Malaysia on the other, if God is willing, the hope for peace will never be lost.”

Following the mutual abolishment of visas, the Malaysian Prime Minister Najib Razak expressed his enthusiastic eagerness towards the reunion of the two nations, who had been kept apart for centuries, with the following statements: “We have very much in common between the two countries. Some of us share a common origin. We should not take this heritage we have for granted and come together to rediscover it. For better relations between peoples.”

Despite the global crisis, both countries are successfully executing the rapid, steady and healthy economic development model that prioritises domestic production and export. Making joint investments as well as capital and technology transfers in areas where both public institutions and private companies have knowledge and experience will undoubtedly be to the benefit of them both.

The two countries usually act in concert within international organisations such as the United Nations, the Organisation for Islamic Cooperation, D-8, and ASEAN. Economic, commercial and diplomatic partnerships are definitely important; however, the extent of unity and solidarity should not be limited to these areas.

Educational and cultural activities, which have been ignored until today, are among the subjects that should be addressed immediately. Departments of Malay language, literature and history should be founded and popularised in Turkish universities, and departments of Turkish language, literature and history in Malaysian universities. Likewise, the necessary steps should be taken to allow many university students to receive education under foreign-exchange programmes.

MALAYS AND TURKS HAVE TO WORK TOGETHER

Malays and Turks must work in complete concert on both regional and international levels to produce solutions to the deep-rooted problems of the Middle East, Asia and Africa, and contribute towards global peace, prosperity, social justice and stability.

When the greatness of the Muslim Turkic and Malay worlds are considered, one can better understand the immense power and energy the increasing cooperation will yield.

Malaysia and Turkey are the bright, modern and high-class faces of Islam. They set an example for the Islamic community and the entire world by embracing the values promoted in the Quran such as democracy, freedom of belief, love, respect, peace, brotherhood, justice and equality.

There is another great opportunity lying ahead of them. They can make an unparalleled contribution towards global peace, prosperity and comfort. And they can only achieve this by taking a mutual stand against the violence, bigotry, darkness, superstitions, radical ideologies and terrorist organisations that appear under the name of Islam.