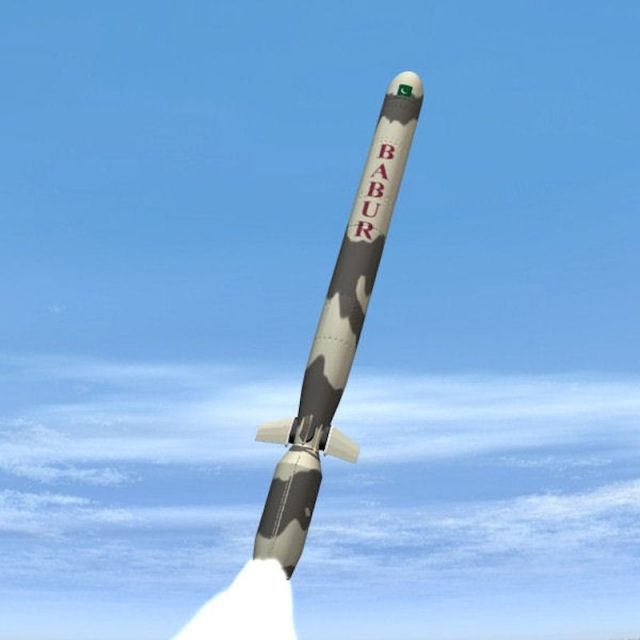 Babur (Tiger) is Pakistan’s indigenously made cruise missile. On August 12th, 2005 Pakistan publicly announced that it has successfully test fired nuclear-capable Babur cruise missile. Missile was launched from a land based transporter erector launcher (TEL) . With this test Pakistan has joined the elite club of twelve countries that posses cruise missile technology. Babur is part of Pakistan’s Haft-7 missile series. Babur is described as a subsonic, low-level terrain-mapping, terrain-hugging missile that can avoid radar detection and strike with pinpoint accuracy it has a range of 500km (310 miles)

Babur is designed to be extremely accurate. It is steered by an inertial navigation system (INS). INS measures every movement of the missile and every change of speed, constantly calculating the missile’s position. It is equipped with precision guidance system that allows the missile to hit small targets. It has been powered by cruise turbo-fan engine which enables the missile to reach approximate speed of 880 km/h (550 miles/h). Babur design features can be compared with American BGM-109 Tomahawk cruise missile.

It can avoid radar detection to penetrate hostile defensive systems “with pinpoint accuracy” and could also be modified so it can be launched from ships, submarines and aircraft. Currently Pakistan is looking into modification that will enable the missile to be launched from its F-16s, Mirage and A-5 air platforms and naval platform such as Agosta 90B attack submarines and its Tariq Class frigates. In a statement issued by ISPR the spokesman said that Pakistan will be modifying the missile for air and sea launch configurations in coming months. He added Pakistan is also working on a more advanced version of Babur (possibly named as Babur-2) with a range of 1,000km with increased payload. Serial production of Babur has started in October 2005.