The Fox Rapid Reaction Vehicle (RRV) has been designed by Jankel with enhanced weight carrying capacity, internal CH-47 air transportability and increased off-road agility to push the boundaries of payload, mobility and performance. Fox is built on a commercial Toyota chassis.

This recent procurement by the Belgium Special Forces of over a 100 Jankel Fox RRVs saw the Belgium Defence Minister, Steven Vandeput comment that the vehicles ‘allow the Belgian army to enter the 21st century”. The Fox fleet brings together Toyota’s expertise in automotive technology and reliability, with Jankel’s military protection and upgraded terrain performance.

Speaking on behalf of the company about the parade, Jankel Managing Director Mike Mullen said, “We’re honoured to have our vehicle showcased in the prestigious parade past the Royal Palace on their National Day. It really is a fantastic event and we’re proud to be able to support the emergency and military services in Belgium.”

The national holiday, one of ten public holidays in Belgium, commemorates Leopold of Saxe-Cobourg, who in 1831 swore allegiance to the new Belgian constitution, resulting in him becoming the nation’s first monarch and the start of the independent state of Belgium.

Tactical Talk - May 29, 2018
0
Tactical Talk (World News) A horrifying incident is becoming somewhat of a trend in India, where a third teenager has reportedly been raped and then... 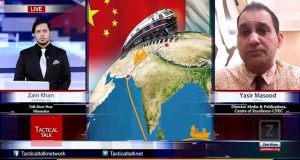