In world politics, while leaders are conducting friendly meetings with each other, the developments taking place in the background sometimes keep escalating the tensions. Perhaps the most typical example of this was the Erdoğan-Trump meeting held on May 17th.

Merely days before the meeting, Trump signed executive orders to arm the YPG, the PKK’s directly affiliated branch, and this strategy was immediately put into effect by the USA. Breaths were held before the meeting; the entire world had recognized this move as deeply displeasing for Turkey. But it was a mystery how this development would reflect on the leaders who would be meeting in person for the first time.

The meeting between the two leaders was quite cordial and genuine as it should be. In fact, regarding the said meeting, CNN International was reporting “Trump extended his warmest welcome to Erdoğan, who had a strained relationship with the previous US administration.“

While the atmosphere inside was amiable, different developments took place outside.  Washington, DC police had not taken any precautions against the PKK supporters staging a protest in front of the Turkish Embassy Chancery, and the violent behavior stirred by the PKK supporters turned towards the bodyguards of the Turkish Ministry of Foreign Affairs. The intervention in the ensuing commotion by American security personnel and the US police lead to a picture that no one would wish to see on civilized streets. The Turkish Ambassador was summoned to the US State Department for a warning; meanwhile in Turkey, the US Ambassador was summoned to the Turkish Foreign Ministry to be given a diplomatic protest note. There are a few points that should be particularly addressed when assessing all these incidents:

Regardless of the context and the atmosphere, continued conflict is a factor that will neither change the course of events, nor lead to a solution. The perpetual aim of the PKK and its supporters is to wreak havoc and destruction through attacks, terrorism and war. The best solution against such foul methods would be to always ensure a legal response. It should be remembered that this strategy, which puts laws to the fore, will reinforce Turkey’s hand in the USA. 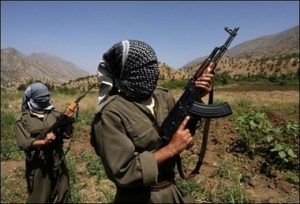 There is no doubt that the US is well aware of the danger the YPG poses. Turkey presented the US side with countless reports expressing how the YPG is a communist terrorist organization and detailing its intentions. Robert Ford, the last US Ambassador to Syria, wrote in his article – featured in the Atlantic in May 11th, 2017 – that “the PYD was established in Qandil by the PKK administration itself, that the PYD militants are from among the PKK ranks, and that the PKK terrorist who perpetrate terror attacks in Turkey have been trained in the Northern Syria“. Ross Wilson, who served as the US Ambassador to Ankara in 2005, stated, “The YPG is definitely a PKK extension. And those who claim that ‘the two are different things’ are simply fooling themselves.” It is clear that, regarding the issue, the US does not suffer from a lack of information. Therefore, it would not be realistic to ascribe the problem to a “lack of debriefing”.

US policy is not shaped singlehandedly by the President. The President might come forth with various promises and changes but the long-established policies of the USA will invariably continue unless there is a shift in US interests. So the issue of YPG, which was an ongoing subject of dispute during Obama’s presidency, will largely remain that way during Trump’s presidency as well. Our wish, of course, is that Trump will exercise perseverance in overcoming these deep-rooted policies and pursue what is right. However, it appears that he needs some time and a stronger hand in this regard.

Above all, the YPG issue is an ideological one. This is not an issue that can be tackled by convincing other countries, nor can it be settled through diplomacy or force of arms. Surely, it is crucial that the USA, Europe and the rest of the countries are convinced about this ominous threat. However, what really needs to be done is to target the YPG’s ideology and eliminate the terrorist organization on an ideological level. The communist ideology stands on a crumbling intellectual foundation. The dialectic mentality can be defeated in no time through scientific evidence. To do so, a scientific work targeting dialectic materialism needs to be undertaken.

Once it is brought down intellectually, communist terrorism and the mercenaries employed to fight on its behalf will be no more. The ideology that drives them to fight will vanish from the face of the earth; they will no longer have a false belief to fight for. If Turkey truly wishes the utter elimination of communist terrorism, instead of experiencing tensions with friendly countries it should follow a different path in its struggle against communist terrorism. Only through a rationalistic display of scientific evidence can communist terrorism be eradicated. This fact is true for any terrorist group that has emerged in the name of an ideological cause. In all such cases, the element that must be stamped out is their ideologies.

The USA is our ally and friend. It is true that we regard the matter of the YPG as a grave problem but surely this issue will not drive a wedge between us and our longstanding ally, the USA. And it is our wish that the USA will soon take a step towards change in its strategy and take its place in the ranks of a scientific struggle that will be waged against the YPG.