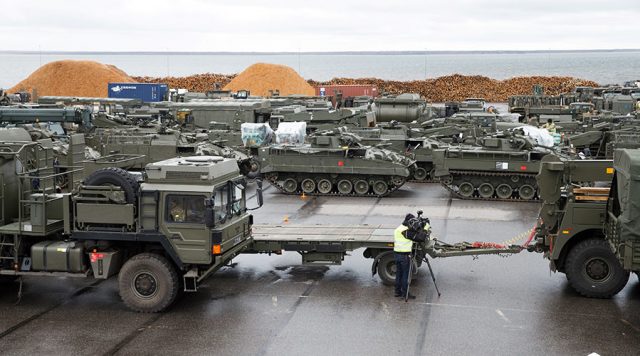 World War II marks one of the darkest periods in the history of mankind. It cost 70 million lives, 41 of whom were civilians. In a period of 4 years, Russian people sustained 23 million losses. During the invasion of Russia, Germany deployed a 4-million-strong army and utilized 600,000 motorized vehicles, along with 3500 tanks and 3000 warplanes. It took the deaths of millions of Russians to halt this fearsome force.

The above-mentioned information regarding the World War II are closely linked to the current developments. Expressing various reservations, NATO, which was founded in the wake of the World War II to prevent the world from facing such an atrocious picture again, has recently been engaged in a similar activity. This activity started on the eastern European borders six months ago and continues with an ever-expanding scale. New NATO troops are being deployed in the countries sharing a border with Russia almost every day. This situation is a cause for concern not only for Russia, which could only recently mend the wounds of the Cold War, but for the entire world.

Today, there are military bases established along the north-south line, in Estonia and Baltic countries, in Poland, Slovakia and Romania, which Russia finds quite troubling. These bases do not solely host infantry units; even anti-armor warplanes such as A-10 Thunderbolts that are intended for ground war are deployed in there as well. NATO does not even feel the need to conceal the fact that this activity is a strategy employed to gain the upper hand in the Black Sea. The power struggles of the past that led to the outbreak of the World War II are basically being waged once again.

The US and the NATO countries that dispatch troops and munitions to the region give Russia’s potential aggressive and hostile attitude as a pretext for this military build-up. However, it was not the Russians who laid waste to the present-day Poland, Ukraine, Czech Republic, Slovakia, Romania, Bulgaria or Caucasus in the World War II. Even today, Russia’s general stance is conspicuously to prioritze diplomacy over conflict. For that reason, turning the entire world into a military facility by hiding behind the excuse of “taking measures against Russia” is criticized by many strategy experts.

So, what is the actual reason behind this defensive military strategy that has been developed out of the blue?

At the root of the tension in the region lies certain think-tanks. Atlantic Council is the mastermind behind NATO’s policy to impose a military blockade on Russia. Founded in 1961, the council is defined by political analysts as an institution where NATO ideologies are determined. And the Quantum Fund, the famous Hedge fund owned by George Soros, took the stage during the economic crises the countries of the region were faced with. It is also pointed out that the open society foundations administered by Soros played a provocative role in many cases ranging from colorful revolutions in various countries to the Arab Spring or self-contained movements such as Gezi Incidents in Turkey.

These think-tanks represent the ideologies called internationalist or globalist. Although these think tanks sometimes bring their aforementioned ideologies to the fore in good faith, their methods usually pose a threat to various countries and communities. So much so that, in less then a period of ten years, the said policies have polarized the world as it was during the Cold War era. As a result of these policies, the Mediterranean and the Black Sea have been overrun with battleships, despite the fact that no war,cold or hot, has taken place between the superpowers. The ancient regions of the world have become zones of heavy conflict. World War III is now being talked about more than ever. Of course, the aforementioned foundations are not directly responsible for this polarization. But the war, finance, natural resource and exploitation policies pursued worldwide are planting the seeds of hatred thatdrive societies into conflict. And its point of origin is largely the policies of the aforementioned think-tanks.

Surely, there arepeople in the world who promote polarization and hot war. These individuals grow richer while millions of people lose their lives. Therefore, when analyzing wars or crises around the world, one must also be closely acquainted with the policies of interest that will make a certain segment of society wealthier. From this point of view, thepotential “Russian threat” has always been a crucial supply of excuse for the said interest groups. Seeing their plans frustrated by the ending of the Cold War, they have always needed “reasons” to ensure the armament of the superpowers. In today’s world, where even the smallest of rumors can spark off rebellions, the “Russian threat” has been opted as an enticing subject that can muster up widespread support. According to these individuals, the existence of such a threat always spell new weapons, new ships, new fronts, and therefore new markets.

Right now, neither the US and Russia, nor the NATO countries are crazy enough to pursue rumors of war, bearing in mind the fact that, today, war is synonymous with nuclear warheads coming into play. Of course, no one would volunteer to go through or put others through such nightmare. When this is the case, rumors of preparation for war or border threats do not seem so realistic. One should realize that these rumors aim to keep some segments of society under constant threat while making certain groups wealthier.

What is needed is common sense. Everyone should have faith in the fact that the world is a place where all countries and ideas can live in harmony. It can be seen that the foreign policies developed under the influence of some think-tanks lead countries on a wrong path. These policies reflect neither the principles of NATO nor the fundamental values of humanity. Values of love and alliance are above all insidious plans. Holding fast on these values and ensuring peace, showing that people do not have to fight each other can change the world. When this happens, the world will achieve the prosperity it has always longed for; money will not fill the pockets of only certain groups, poverty and hunger will be utterly eliminated.

This should not be forgotten: A world ruled by war strategists is a world with a dark future. What will usher a resounding era of peace is the alliance of the good.