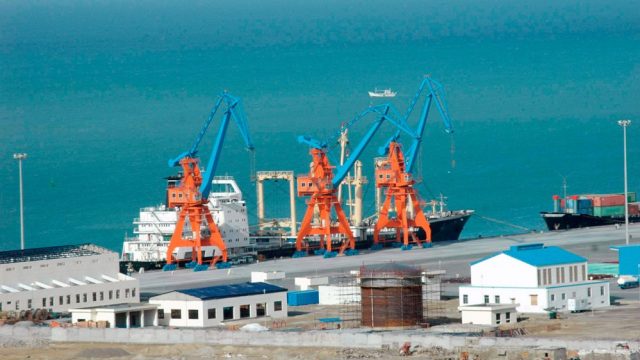 The government is learnt to have set aside Rs44 billion, or a quarter of CPEC funding, for the next fiscal year, giving the western route of the China-Pakistan Economic Corridor its first serious push, initiating the construction of roads in the country’s underdeveloped areas.

At the same time, CPEC’s eastern route, which is at an advanced stage of completion, was also given required financial resources in the Public Sector Development Programme 2017-18. The next fiscal will be the third year of execution of CPEC projects.

The allocation and spending patterns of CPEC projects suggest that work on the eastern route will be completed faster than the western route.
For the new financial year, the government has set aside Rs180 billion for CPEC projects, including Rs5 billion block allocations, said Minister for Planning & Development Ahsan Iqbal.

The total cost of CPEC infrastructure projects is estimated at Rs1.08 trillion, which is about one-third higher than the previous year. So far, Rs231 billion has been spent on these schemes, mainly on eastern route projects, leaving a balance of about Rs850 billion that will be spent in the coming years.

Unlike previous years, this time the federal government has set aside sufficient resources for three main schemes of the western route. For the construction of Hakla-Yarik-Dera Ismail Khan motorway, the Planning Commission has proposed Rs38 billion for the next year. The cost of this scheme is Rs110.2 billion and the ministry had allotted Rs16.4 billion in the outgoing fiscal year.

Till June this year, an estimated Rs12 billion would have been spent on this western route project.

CPEC, which will be constructed from 2014 to 2030, talks about integrated links to China’s One Road, One Belt and 21st Century Maritime Silk Route. With active consultation of Chinese authorities, Pakistan has prepared a plan to construct two corridors: western alignment and eastern alignment. The last one has been picked for development in the first phase.

Article 3 of July 2013 Memorandum of Understanding on Long Term Plan of CPEC explains the rationale behind picking the eastern corridor first.

“Long-term plan should be developed under the principle of scientific planning, steadily developing, and take the easiest the first,” it stated.

However, after objections raised by political parties having mass appeal in Khyber-Pakhtunkhwa and Balochistan, the federal government decided to start work on the western route.

Last year, Prime Minister Nawaz Sharif performed groundbreaking ceremonies of western route projects, including a couple of schemes that had been conceived even before CPEC was announced.

The government has also included Basima-Khuzdar road on the western route in next year’s PSDP, allocating Rs1.5 billion for its construction. The total cost of this project is Rs19.2 billion and so far just Rs10 million had been spent on it.

The government has also proposed Rs4.6 billion for the dualisation of Yarik-Mughalkot-Zhob project, also falling on the western route. The total cost of this scheme is Rs74.5 billion and only Rs850 million has been spent so far.

A major chunk of infrastructure projects will still go to eastern corridor projects. For the Multan-Sukkur section of the Lahore-Karachi Motorway, Rs30.2billion has been proposed for the next fiscal year against the remaining financing requirements of Rs213 billion.

For the construction of Burhan-Havelian Expressway, the government proposed Rs3 billion for finishing remaining work. Two new projects, Gilgit-Shandor-Chirtral road with a total cost of Rs22 billion and Mirpur-Mangla-Muzafarabad-Mansehra road worth Rs142 billion have also been added under the CPEC umbrella.

However, the government assigned a token allocation of Rs200 million for each of the projects.

A seven-year old project, Improvement and Widening of Jaglot-Skardu road project was also included in the CPEC basket. The total cost of this scheme is Rs22.1 billion and Rs6 billion have been proposed in the next budget.

The ministry of interior also included a project with a total cost of Rs1.8 billion for providing security to CPEC projects. For an international airport at Gwadar, Rs1 billion have been proposed against the remaining requirements of Rs21.2 billion.

The government proposed Rs1.5 billion for building the Eastbay Expressway project in Gwadar against remaining requirements of Rs14 billion. Land for the project would be acquired for Rs16 billion, while the government also decided to include a new project in the PSDP. It allocated Rs3 billion for the next year.

For preliminary design, drawings, for upgrading the main-line of Pakistan Railways and setting up a dry port near Havelian, a project with a cost of Rs10.6 billion has been added in the PSDP. An amount of Rs4.2 billion has been proposed in the next year budget. For construction of 600KV Matiari-Lahore transmission line, the government proposed two projects to set up convertors at a cost of Rs4 billion.

For next year, Rs600 million have been allocated for these two schemes.