This time things looked different, the media completely backed Hillary Clinton, she was perceived as the first credible female contender for the post of President of the United States. Even the election predictions were totally in her favour, she seemed to have a better chance of winning the presidency than Trump, still most of these predictions only took into account the results of the previous elections.

Any upsets were not accounted for, and an imperceptible shift happened, as it is both the candidates were polling at higher negatives than any previous two presidential candidates. The 2016 elections were unlike any previous ones as in no American election had gender been a major factor. 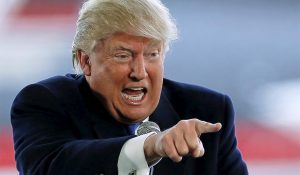 The Trump style is direct, blunt and outspoken, this worked like ammunition for the cause of gender equality and even national slogans were created by the opposition against him that sounded like a veritable ‘call to arms’ for American women. Trump noticed and publicly accused Hillary of playing the ‘woman card’. She retaliated with, “If fighting for women’s healthcare and paid family leave and equal pay is playing the woman card, then deal me in!” At the final presidential debate, Trump labelled Clinton as a “nasty woman”, making things much uglier, every feminist came out against him in full fury, even Michelle Obama ran him down in her speeches that presented him almost like a rapist. Unfortunately, the presidential elections became too personal and an emotional fight for many American women.

If Hillary had really won, apart from the political aspect it would have been a definite victory for American women, the presidency was the final hurdle to be crossed. Countries like Pakistan, India, Britain and many others have had women as head of state, it is the American presidency that has remained out of reach  for women and remained a man’s prerogative.

As writer and columnist Anne Donahue said on Twitter, “What’s even more demoralizing is knowing how hard Hillary’s worked and how qualified she is, and yet … And every woman knows this feeling,”.After the initial jolt, many women came out on the streets to protest, many women viciously criticized Melania Trump and even accused her of loose morals, using her past against her just because she was the wife of a man who robbed Hillary of the Presidency.

In American presidential campaigns, only Geraldine Ferraro and Sarah Palin had made it to being nominated for Vice President, Clinton became the first presidential candidate, she acknowledged this rare achievement with the words, “Tonight, we’ve reached a milestone in our nation’s march toward a more perfect union: the first time that a major party has nominated a woman for president”.

Notwithstanding all the’woman power’ and a big show by America’s strong and powerful women, there was another side to the electoral race. Surprisingly, it was a majority of women that voted Trump into power eventually, this came as a rude shock for American feminists and instead of celebrating the first woman president they were finding out how to immigrate to Canada. A whopping 53% of white women had opted for Trump and his policies, even after all the step-motherly treatment meted out to him by American television and print media.

Did the fault lie with the feminists who have not been able to get support or sympathy from working-class American women? As prominent feminist Christina Hoff Sommers says, “ I am a strong supporter of classical equality feminism — the sort of feminism that won women the vote, educational opportunity, and many other freedoms. Equality feminism wants for women what it wants for everyone — fair treatment, respect, and dignity. But on today’s campus, equality feminism has been eclipsed by fainting couch feminism.” Feminism may have become too elite a cause, just to create plush surroundings for rich women and scare the targeted men into silence, there was less focus on the legal aspect, on basic rights and better jobs for the middle class, most feminists had become more ‘anti-man’ than pro-women, so to say. 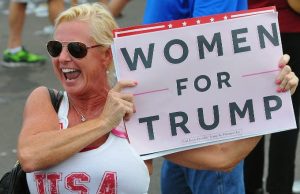 Some of the women who voted for Trump did not completely condone his behaviour, they had just quietly preferred him to the alternative. While many women were stuck in the gender phenomena, there were many others that disliked Hillary Clinton’s past when she was in a position of power. This aspect is largely overlooked as well as the fact that Trump gives his daughter Ivanka immense importance, after getting elected as President he has sought for high security clearance for his three children.

Ivanka also accompanied him when he met the Prime Minister of Japan, feminists might quieten down eventually once the importance of Ivanka’s future role sinks in, if feminism is about empowerment then Trump has not grudged it to his daughter. She has stood by her father throughout the election campaign, often making the public wonder how a ‘bad man’ can have such a devoted, dutiful daughter.

The Trump victory came as no surprise as there was a lack of substance in the election game of personal allegations and rebuttals. Even though Clinton had almost half the nation’s women with her, the majority of women still voted for Trump. The fact of the matter is that America is not ready for a female President, the U.S. establishment has remained a male dominion, maybe due to the lack of leadership qualities in female political candidates. What was needed was a better woman candidate, one that men and women both could support and admire irrespective of education or social level, it was totally incongruous to turn the U.S. Presidential elections into a ‘feminist fight’ to divert from the real issues.