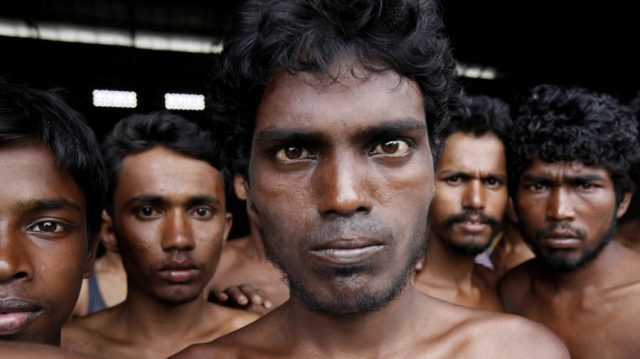 Known as the world’s most persecuted and friendliness people, the Rohingya are an ethnic group that has been a part of Myanmar for centuries. However, due to their ethnicity and faith, they were subjected to unimaginable horrors for decades. Their heart-wrenching plight has become intense, despite extreme measures taken by the Myanmar government to prevent the rest of the world from getting any hint of what is really going on; the mass slaughters, rape, arsons, torture were too much to be missed by the world. And after seven years, since the heightening of their plight in 2010, the situation doesn’t seem to be improving.

Although the Rohingya community has lived in Burma for centuries, – a historical fact substantiated by official documents- the Myanmar government refuses to acknowledge them and rather claims that they are illegal Bangladeshi refugees. For this reason, they avoid calling them “Rohingya”, so much so the government recently arrested five people because they printed a 2016 calendar that made references to the Rohingya as an ethnic group.

Today some 120,000 Rohingya are restricted to living in squalid camps in their own homeland, and they have been deprived of the most basic human rights as well as access to livelihoods. They even need to get permission to marry or travel outside their villages. Persecution and oppression at the hands of both the army and racist Buddhist groups has never been anything new to them, but since 2010 their ordeal has reached unbearable levels. They were hunted down, tortured, maimed, raped, burned and driven out of their homeland in makeshift boats only to be rejected by most neighboring countries. A Yale study claims that more than one million Rohingya have been abused so far, which amounts to genocide.

While those that made it to neighboring countries again face very difficult prospects, which would certainly require a completely separate article, we’re going to look into what’s been happening to the ones left behind. As mentioned, these downtrodden people, aside from being indiscriminately and violently targeted both by the military and violent Buddhist mobs, are deprived of most basic human rights, including medical treatment. These people are practically condemned to a slow death in front of the world. As Hollywood actor Matt Dillon remarked after his visit to the area: “They are being strangled slowly, they have no expectation from the future and nowhere to go.” Because of the atrocity of the situation, stories like the death of 14-year-old Mohammed due to tetanus, -an easily preventable disease in normal conditions-, or a 28-month-old toddler Hirol, now orphaned and dangerously thin, because he lost his mother to hepatitis A due to lack of medical treatment, are common sights in this part of the world. 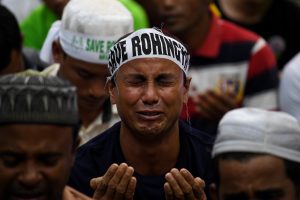 Most recently, a military crackdown in Rakhine state forced 70,000 Rohingya to leave for Bangladesh, even though the latter is known to be generally hostile to them. However, this time the military operation has been even more brutal than usual, because there has been systematic rape by Myanmar soldiers. In one story told by a victim, when a distraught father asked the soldiers to stop, they said, “We are not doing as much to you as we have been ordered to do in Oula Para”. Matthew Smith, of the advocacy group Fortify Rights, points to this sinister trend and says, “This is not something that has happened by rogue soldiers… a crime that was committed spontaneously. It’s very clear to us at this point that state security forces set out to systematically rape Rohingya women and girls”.

Myanmar’s military has been known to use rape as a tactic against ethnic women, but especially in the past six months reports of rape have increased sharply and systematically. Smith continues: ‘There was an outburst of it, and particularly in November, that was unusual even by the Myanmar military’s brutal standards’.

Once a hero of human rights groups around the world, Burma’s de facto leader Aung San Suu Kyi has the following to say: “Military matters are to be left to the army.”

This is especially unexpected considering ladies are naturally compassionate, loving individuals, particularly so when they are mothers. However, in a shocking volte-face on her former principles of human rights for the sake of politics, she denies that there is an ethnic cleansing in Myanmar and even claims that Rohingya are killing Rohingya. This scandalous stance was enough to unsettle and alienate the entire world, even her most loyal supporters. Unsurprisingly, the government doesn’t want any UN investigation in the region.

The international response is regrettably lacking. Despite the eerie resemblance to the Srebrenica massacre of 1995, when some 8,000 Bosnian Muslims, who were ostensibly under the protection of the UN, were slaughtered in plain view, most countries simply choose to remain silent.

The terrorists that managed to infiltrate the peaceful Buddhist community, display a disturbing amount of hatred and violence towards Muslims, who have lived there as a peaceful and quiet community for centuries.

UN officials explicitly state that the ultimate goal of the Burmese government and military is ethnic cleansing. Phil Robertson of HRW wonders why no investigation is allowed in the country if the government is so sure that there is nothing wrong: “Our response to her would be that if there wasn’t such a big problem then why not allow the U.N. Human Rights Council fact-finding mission into those areas, provide them with unfettered access.”

As the Malaysian Prime Minister Najib Razak, the leader of a country that had shown a commendable approach to the influx of Rohingya refugees, eloquently put it: “The world cannot sit by and watch genocide taking place. The world cannot just say ‘Look, it is not our problem’. It is our problem”.

Indeed, it is our problem. Every human being on this planet is responsible when a fellow human being is hurt. Let’s rise up to the task and do our part in alleviating the pain and suffering of innocent people.